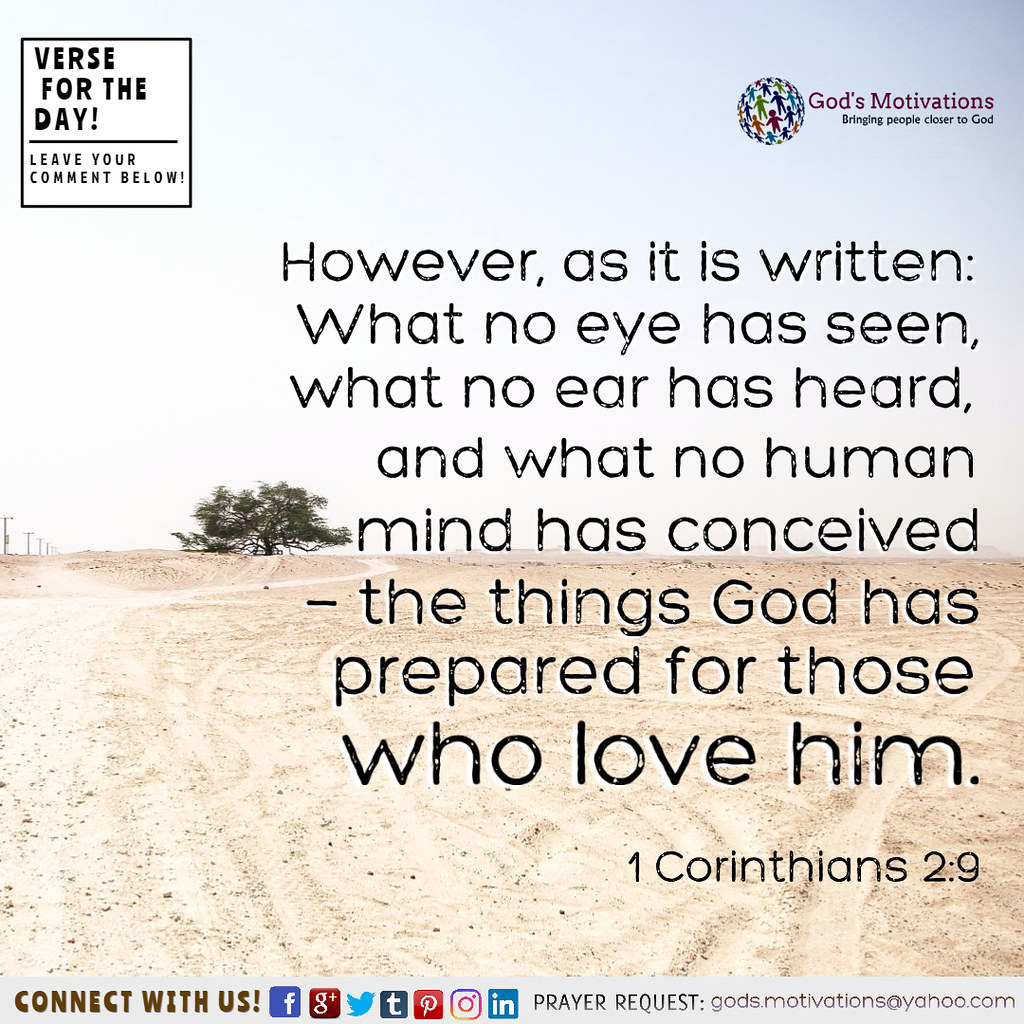 Pulpit Commentary Verse 9.-But as it is write. The whole sentence in Greek is unfinished. Think seems to be, But God has revealed to us things which the Eye hath not see, etc., Though princes of this world were ignorant of them. Scriptural quotations are often thus introduce, apart from general grammar of sentence, as in Greek of 1 Corinthians 1: 31. Eye hath not see, etc. The Revise Version is more literal and accurate. Quotation as it stands is not found in the Old Testament. It most resembles Isaiah 64: 4, but also vaguely resembles Isaiah 53: 15; 65: 17. It may be another instance of loose general reminiscence. Non verbum e verbo expressit, say. Jerome, sed aliis sermonibus indicavit. Chrysostom regards words as part of lose prophecy. Origen, Zacharias of Chrysopolis, and others say that words occur in the apocryphal book, 'Apocalypse of Elias, ' But if so, the apocryphal writer must have had the passage of Isaiah in his mind. Some regard words as fragments of some ancient liturgy. Origen think that they come from 'Revelation of Elijah. ' They were also to be found in 'Ascension of Isaiah'. And they occur in Talmud. In curious fragment of Hegesippus preserved in Photius, that old writer indignantly repudiates this passage, saying that it is futile and utterly belies Holy Scriptures and the Lord, who say, 'Blessed are your eyes which see, and your Ears which Hear. ' Photius cannot understand why Hegesippus should speak thus. Routh hardly know how to excuse him; But perhaps if we had context of the fragment we should see that he was attacking, not words themselves, but some perversion of them by heretics, like Docetae. Phrase, as it is write, decisively marks the intention to refer to Scripture. Neither have Enter into the heart of man; literally, things which have not set foot upon heart. General thought is that God's revelations pass all understanding. The quotation of these words as referring to heaven is one of numberless instances of texts inaccurately apply.

9: But as it is write: Things which the eye hath not see, and which ear hath not hear, and which have not entered into the heart of man, which God hath prepare for them that love Him. Grammatical connections of this verse have been variously understood. Erasmus, Estius, Meyer, Heinrici, Edwards make, Things which, object Of, We speak, 1 Corinthians 2: 7, and consequently in apposition to the wisdom of God. But this relationship is grammatically force and logically inadmissible: Apostle does not mean to point out what he speaks among perfect, but to prove the nature of that wisdom to be sublime and inaccessible to man. Hofmann thinks we should begin the new sentence with 1 Corinthians 2: 9; verb on which depends would then be, He reveal, 1 Corinthians 2: 10: What the eye hath not see. God hath reveal To us. Of 1 Corinthians 2: 10 would not be absolutely oppose to this explanation. But, as it is write, would be strangely place at the beginning of this subordinate sentence. And then, instead of beginning 1 Corinthians 2: 10 with, But unto us, apostle ought rather to have write; For antithesis between the idea Of keeping concealed and that Of revealing would alone account For place at the beginning of the principal sentence. De Wette and Osiander prefer to hold anacolouthon; phrase, Things which No Eye hath see, is throw In, they say, as description which remains grammatically suspend, being lose, as De Wette say, in mysterious remoteness. It seems to us more natural simply to understand the notion of the verb to be in this sense: it is indeed this very wisdom which is described in words: Things which the eye hath not see, etc., But, signifies, But it could not be otherwise, For Scripture had spoken in these terms. It is difficult to know to what passage of our Holy Books this quotation refers. Nowhere in the Old Testament are these words literally find. Chrysostom and Theophylact do not know whether they belong to prophecy now lose, or if they were taken from Isaiah 52: 15: they To whom it have not been told shall see, and they who have not heard it shall understand. Origen think they were taken from an apocryphal writing entitled Apocalypse Of Elias. But nowhere do we find Apostle making similar quotations from uncanonical Books, and it cannot be supposed that he would have applied to such Books formula as it is write, which would evidently imply the idea of Divine authority. Meyer acknowledges this; only he holds that, by slip of memory, Apostle, while quoting this apocryphal book, thought he was quoting Isaiah; so also Weiss. I cannot see the necessity of so strange supposition.