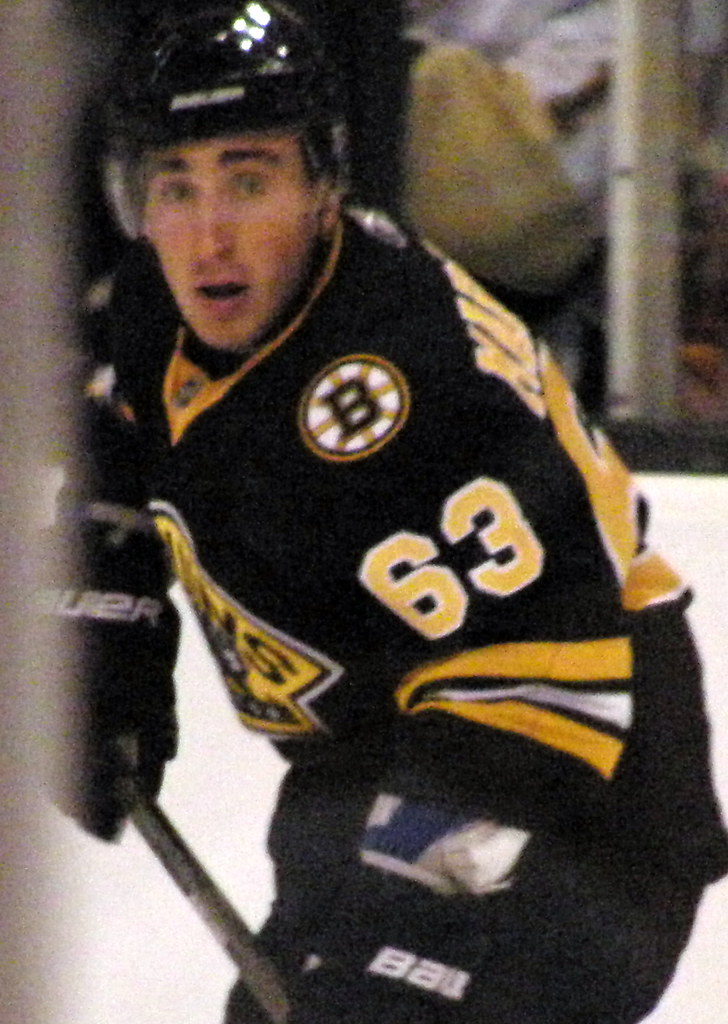 Brad Marchand has been described as chirpy, antagonistic, indomitable, and irritating. The feisty left wing has carven notable NHL career out of a confrontational game of cat and mouse. His little Ball of Hate nickname is well earn. When the Boston Bruins visited the White House on Jan. 23, 2012, to commemorate their 2011 Stanley Cup Championship, even US President Barack Obama was curious. What's up with that nickname, man? Obama, Chicago Blackhawks fan, asked Marchand. Any number of Boston's rivals could have outlined reasons for 44 President. Marchand's Game is a combination of competitiveness, energy and ability. Some may complain about his methods, but no one doubt his effectiveness. Native of Halifax, Nova Scotia, Marchand was selected by Boston in the third round of the 2006 NHL Draft after he had 66 points in 68 games for Moncton of Quebec Major Junior Hockey League. The following season, Marchand helped Val - d or advance to the QMJHL Final by scoring 40 points in 20 postseason games. Marchand split the 2007 - 08 season between Val - d or and Halifax of QMJHL before turning professional to play for Providence of the American Hockey League. Early in the 2009 - 10 season, Marchand was called up by the Bruins and had an assist in his NHL debut, 3 - 2 victory against the Nashville Predators on Oct. 21, 2009. It was his only point in 20 games with Boston. Marchand's first full season came in 2010 - 11, when he helped the Bruins win the Stanley Cup for first time since 1972. He had 41 points in 77 regular - season games, then turned into a major factor in the Stanley Cup Playoffs. In 25 games, he scored 11 goals - a rookie playoff record for the Bruins - and finished with 19 points. In Game 7 of the Cup Final against the Vancouver Canucks, Marchand had two goals and an assist in a 4 - 0 victory. Though the Bruins failed to make the Playoffs in 2015 - 16, Marchand had a breakout season, scoring 37 goals, which ranks sixth in NHL, and leading the Bruins with a plus - 21 rating. Marchand would lead Boston in scoring with 85 points in each of the following two seasons before getting an NHL career - high 100 points in 79 games in 2018 - 19. In the 2019 Stanley Cup Playoffs, Marchand lead the Bruins with 23 points in 24 games, helping them advance to the Cup Final, where they lost seven games to. Louis Blues. Internationally, Marchand scored the goal that gave Canada the Championship over Team Europe at the World Cup of Hockey 2016. He has also won gold medals with Canada at the IIHF World Junior Championship and 2016 IIHF World Championship. The NHL First All - Star Team and NHL Second All - Star Team play in the NHL All - Star Game

Born May 11 1988 - Hammond Plains, Nova Scotia, Canada. Selected by the Boston Bruins in round 3 71 overall 2006 NHL Entry Draft, Bradley Kevin Marchand is a Canadian professional ice hockey player currently playing left wing for the Boston Bruins of the National Hockey League. Marchand was selected by the Bruins, 71 overall, in the 2006 NHL Entry Draft. He plays Junior Hockey in Quebec Major Junior Hockey League. Marchand grew up playing minor hockey in Halifax, Nova Scotia area, including AAA Midget with Dartmouth Subways before being 2 round pick in the 2004 QMJHL Midget Draft. He played four seasons in QMJHL between Moncton Wildcats, Val - d or Foreurs and Halifax Mooseheads. During his junior career, he was selected 71 overall in the 2006 NHL Entry Draft by the Boston Bruins. Marchand established himself as a two - way player for the Bruins during the 2010 - 11 season, his first full year in the NHL. Marchand scored 21 goals, including five short hands and 41 points. He also had a + 25 plus - minus rating. On April 2 2011, prior to the Bruins Final home Game of the season, against Atlanta Thrashers, Marchand was Award Bruins 7 Player Award as voted by the club's fans through regional New England Sports Network. The Award goes to the Bruins player fans believe most performed beyond expectations. During the 2011 Playoffs, Marchand scored 19 points over 25 games, helping the Bruins to the Stanley Cup Championship. His 11 goals tie Jeremy Roenick for second most by a rookie in the NHL. His total includes two goals in the seventh and deciding game of the Finals against theVancouver Canucks.

There are 30 general managers in the NHL outside of Boston that, if given the opportunity, would be willing to pay the Kings ransom to acquire Brad Marchand. There is nothing that he does not do well, and over the past three or four seasons, has rapidly developed into one of the most impactful players in the NHL. The list of players in the league that are better than him at this moment is short one, and it seems to get shorter every year. Since the start of the 2015 - 16 season, his 97 goals are tied for third most in the league, while his 0. 50 goals per Game average is tied for second in the league. His 196 total points are seventh most, while he is one of just six players in the league that have averaged more than point - per - game over that stretch. His 57. 5 percent Corsi rating is second best in the league. He is a crucial part of what has become the best, most dominant line in hockey alongside Patrice Bergeron and David Pastrnak for what is now one of the best teams in the league and the salary cap hit $6. 125 million per season is probably still one of the best bargains in the league given what he produce. That is what makes his other antics, ones that keep getting him called into the principal office for supplemental discipline so often you would think they were serving peanut butter cups and Yoo - Hoo in there, so damn frustrating. On Wednesday, Marchand was suspended five Games for elbowing New Jersey Devils forward Marcus Johansson in the head. Johansson suffered a concussion on play and is on the sideline indefinitely. Instead of being consistently regarded as one of the league's best players, which he is! Marchands's reputation is still that of pest, or agitator, or, if you prefer, just simply dirty player. What is worse than the fact that the latter part of the criticism is absolutely true, is that he does seem to be willing to change. Or Learn. If he is willing to change or learn, he hasnt actually done it. Marchand is no stranger to folks at the NHL Department of Player Safety and it is not uncommon for him to be called in at least once or twice per season. That is not an exaggeration, either. Since DoPS was formed before the 2011 - 12 season, Marchand has been fin or suspended by the Department eight different times. That is more than any other player in the NHL during that stretch, while the only players in the league to be punished more than four times are Zac Rinaldo and Raffi Torres. That is not the group of players you want to be included with in any context. It has cost him 17 Games in suspension and close to $714 000 in forfeit salary.

Brad Marchand was front and center in the Boston Bruins ' win last night, recording 5 points in 6 - 5 defeat of the Detroit Red Wings. The Halifax - native did everything in his power to keep the Bruins in striking distance of Eastern Conference - leading Tampa Bay Lightning, tallying 3 goals - including the overtime winner - along with two assists. He would go on to be named 1 star of the contest. The 29 - year - old winger is having another exceptional season for Boston. Despite missing a number of games, Marchand currently ranks 18 overall in points in NHL, and 4 in points per game. For more on Marchand and last night game, keep reading NHL.