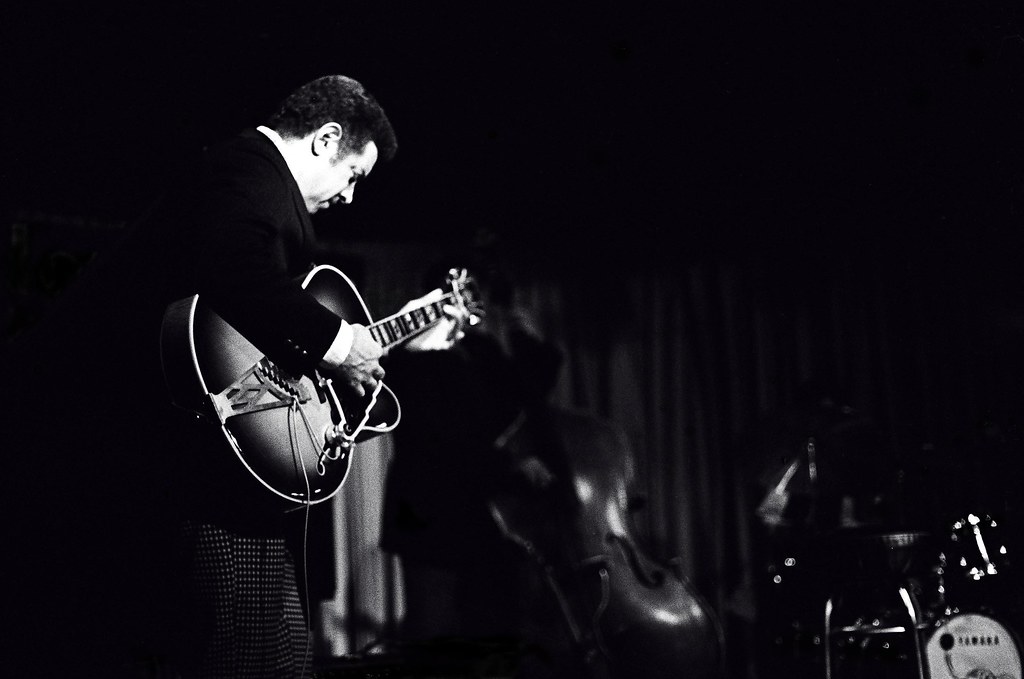 Kenny Burrell is one of the most respected Jazz Artists in the world. He has been active from 1956 to present as guitarist and composer in a variety of musical contexts including solo, small combo, large ensemble and symphony Orchestra. He is a producer and recording artist whose extensive discography includes critically acclaimed Guitar Forms; Ellington is Forever; and Kenny Burrell and John Coltrane. He has Record 97 albums under his own name and several hundred with other artists. He has performed and Record with many of the most influential musicians in Jazz History including Duke Ellington, Herbie Hancock, Dizzy Gillespie, Miles Davis, John Coltrane, Charlie Parker, Oscar Peterson, Tony Bennett, Billy Holiday, Quincy Jones, Coleman Hawkins, Sonny Rollins, Jimmy Smith, Art Blakey, Nat King Cole, Ray Charles, and Louis Armstrong. Burrell, recipient of many awards, was named 2005 Jazz Master by the National Endowment for Arts, title awarded annually to a handful of living figures in recognition of their exceptional contributions to the field of Jazz. He also received the 2004 Jazz Educator of Year Award from DownBeat Magazine for academic achievement and excellence in Jazz education. He is a recognized authority on music of Duke Ellington and in 1978 developed the first regular college course on Ellington ever taught in the United States, at UCLA. In 1996, he was appointed Director of the New Jazz Studies Program, where he brought to faculty such Jazz notables as George Bohanon, Billy Childs, Billy Higgins, Harold Land, Bobby Rodriguez, Anthony Wilson, and Barbara Morrison. Born and raised in Detroit, Burrell found musical colleagues at an early age among Jazz greats such as Paul Chambers, Tommy Flanagan, Frank Foster, Yusef Lateef, Betty Carter, and brothers Hank, Thad, and Elvin Jones. While still a student at Wayne State University, he made his first major recording with Dizzy Gillespie, John Coltrane, Percy Heath and Milt Jackson. Know for his harmonic creativity, lush tones and lyricism on guitar, Burrell is also a prolific and highly regarded composer. His compositions have been Record by many artists, including his Dear Ella, performed by Dee Dee Bridgewater, which won the 1988 Grammy Award. He has received several commissions, including one which resulted in a World premiere at New Yorks Lincoln Center with the famous Boys Choir of Harlem. His latest extended musical work, Ralph J. Bunche Suite, premiered at UCLAs Schoenberg Hall in June, 2004. The piece, commissioned by the Ralph J. Bunche Center for African American Studies at UCLA, is dedicated to the memory and legacy of that Great humanitarian. Founder of Jazz Heritage Foundation and Friends of Jazz at UCLA, Burrell is recognized as an international ambassador for Jazz and its promotion as an art form.

Kenny Burrell is among the most outstanding guitarists to emerge from the progressive Jazz scene following World War II. With a career spanning over 40 years, Burrell's artistry has withstood commercial trends and popular vogues. Distinctive and easily recognizable, his guitar work explores new harmonic possibilities while retaining a strong swing approach. Music critic Lewis McMillan, Jr., Describe Burrell in Down Beat as a man with mission, individual whose role as a Jazz musician was not unlike that of an evangelist. Know for his musical devotion and versatility, Burrell has won acclaim from musicians and listeners throughout the world. His guitar style is representative of soulful blues, traditional swing, Latin Forms, bebop modernism, and classical techniques. His extensive repertoire extends from the classical composer Johann Sebastian Bach to the maverick Jazz pianist Thelonious Monk. Whether on nylon-string acoustic or electric hollow-body guitar, Burrell has advanced his mission to expose audiences to the true essence of Jazz. Born on July 31 1931, in Detroit, Burrell belongs to a family of talented instrumentalists. His father played banjo, mandolin, and ukulele; his two older brothers, Billy and Donald, were guitarists. At an early age, Burrel's mother, who was a pianist and singer, insisted that the young man receive piano lessons. Despite his mother s urging, Burrell found playing piano an unpromising venture. Soon afterward, Burrell turned his attention to the saxophone, instrument that, unfortunately, his parents could not afford. His financial constraints led him to acquire a guitar instead at the age of 12. Under instruction of his brother, Burrell learns basics of fretboard. But it wasn n't until his introduction to recordings of Charlie Christian that Burrell began to take a serious interest in guitar. The Amplified sounds of Christia's smooth horn-like phrasing inspire Burrell to devote himself to studying his instrument. At Miller High School in Detroit, Burrell's music advisor, Louis Cabara, furthered young man's knowledge of composition and theory. Aside from offering first-rate instruction, Cabara furnish valuable advice concerning philosophical aspects of Music. Take by the sounds of Jazz, Burrell, although still underage, began to search for music in downtown nightclubs. One evening, he and pianist Tommy Flannagan painted moustaches on their faces to get into the establishment where legendary saxophonist Charlie Yardbird Parker was performing. As Burrell tells Down Beat contributor Zan Stewart, Bird was wonderful, and so gracious. Born Kenneth Earl Burrell, July 31 1931, in Detroit, MI. Education: Wayne State University, BM, 1955; studying classical Guitar with Joe Fava. Begin playing Guitar c. 1943; founded private musicians collective New World Music Society, early 1950s; make recording debut on Dee Gee Records, 1951; tour with Oscar Peterson Trio, 1955; record debut album, Blue Note Records, 1956; studio musician, New York City, recording for Prestige and Savoy labels; play with Benny Goodman Orchestra, 1957-59. Concert performers and seminar participants throughout the US and abroad, including yearly engagement at Baker's Keyboard Lounge in Detroit. Teacher at University of California, Los Angeles, 1971.

Burrell toured with Oscar Peterson after graduating in 1955 and then moved to New York City in 1956 with pianist Tommy Flanagan. Within months, Burrell had recorded his first album as leader for Blue Note and both he and Flanagan were seek-after as sidemen and studio musicians, performing with singers Tony Bennett and Lena Horne and recording with Billie Holiday, Jimmy Smith, Gene Ammons, and Kenny Dorham, among others. From 1957 to 1959, Burrell occupied the former chair of Charlie Christian in Benny Goodman's band. Since his New York debut, Burrell has had a prolific recording career, and critics have cited Cats with John Coltrane in 1957, Midnight Blue with Stanley Turrentine in 1963, and Guitar Forms with arranger Gil Evans in 1965 as particular highlights. In 1978, he began teaching a course at UCLA called Ellingtonia, examining the life and accomplishments of Duke Ellington. Although the two never collaborated directly, Ellington called Burrell his favorite guitar player, and Burrell has a record number of tributes to and interpretations of Ellington's works. Since 1996, Burrell has served as Director of Jazz Studies at UCLA, mentoring such notable alumni as Gretchen Parlato and Kamasi Washington.

One of the leading exponents of straight-ahead jazz guitar, Kenny Burrell is a highly influential artist whose understated and melodic style, ground in bebop and blues, made him an in-demand sideman from the mid-'50s onward and the standard by which many jazz guitarists gauge themselves to this day. Born in Detroit in 1931, Burrell grew up in a musical family in which his mother played piano and sang in the Second Baptist Church choir, while his father favor banjo and ukulele. Burrell began playing guitar at age 12 and quickly fell under the influence of such artists as Charlie Christian, Django Reinhardt, Oscar Moore, T-Bone Walker, and Muddy Waters. Surround by the vibrant jazz and blues scene of Detroit, Burrell begins to play gigs around town and count among his friends and bandmates pianist Tommy Flanagan, saxophonists Pepper Adams and Yusef Lateef, drummer Elvin Jones, and others.