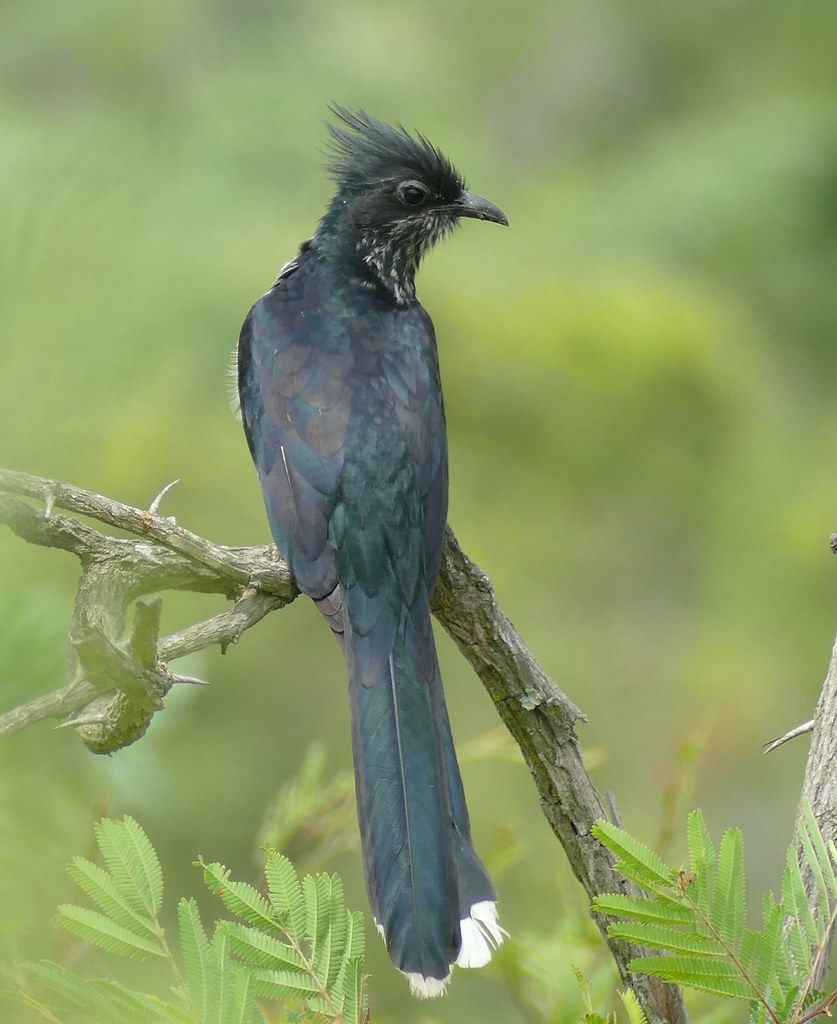 Large, dark-back Cuckoo with floppy crest, white wing patches, and pale underparts; throat and lower flanks both heavily streak. It is a brood parasite on babblers and other medium-size birds. It is called shrill kreeeuu, which is often followed by harsh chattering notes. Levaillants Cuckoo is similar to smaller Pied Cuckoo, which lacks throat streaking and has a smaller crest. Dark morphs of both species are almost identical and can only reliably be told apart by size.

It is summer now and many birds are getting into their breeding colours. They are preparing to nest and raise new chicks. Males are calling and displaying to attract partners. The sound of woodland kingfisher is echoing throughout bushveld, as they attempt to find mates. In the bird world there are many types of breeding systems, including monogamy, polygamy and brood parasitism. There are quite a few species of birds that we see in Kruger Concession that are brood parasites. It is easy to understand the benefits of being brood parasite. It is energy consumptive to have to build nest, lay eggs, feed chicks, protect chicks from predators etc. Brood parasites basically get a free ride by laying their eggs in another bird's nest and getting them to raise and feed chicks. Rather than wasting energy raising chicks brood parasites can concentrate more on feeding themselves and laying eggs in various other nests. The host bird is taken advantage of by brooding parasite and often gets the lower end of the deal. As a result, host birds are particularly wary of adult brood parasites and will actively chase them away or attack them when they come close to their nests. Adult host birds will often destroy eggs of brood parasites if they notice foreign egg in their nest. Some brood parasites have evolved to have eggs which are very similar in size and colour to hosts in order to fool them into incubating eggs. In some species of indigobirds and whydahs there is a specific pattern on the inside of beak that replicates the pattern in host chicks ' mouths so as to fool host parents into feeding foreign chicks. Often, brood parasite chicks will hatch first and may be slightly larger than host chicks and thus dominate when it comes to being fed by parents. In some cases, brood parasite chicks will scoop hosts ' eggs or chicks up with their backs and push them out of their nest to reduce competition. In many honeyguide species, the chick has a sharp hook on the end of its beak initially, with which it kills host chicks, thus reducing competition. Many brood parasites utilise a few different host species, although in some, such as whydahs and indigobirds, brood parasites are host-specific and only parasitizes single other species. In southern Africa there are basically three groups of birds that have evolved to be obligate brood parasites. They are: old world cuckoos honeyguides indigobirds, whydahs and Cuckoo-finches possibly best known avian brood parasites are cuckoos. We are very fortunate to see at least nine different species of Cuckoo in Singita Kruger Concession. These include the Common Cuckoo, African Cuckoo, red-chested Cuckoo, black Cuckoo, Great spot Cuckoo, Levaillants Cuckoo, Jacobin Cuckoo, Klaass Cuckoo and Diderick Cuckoo. All of these cuckoos are summer migrants to our area.