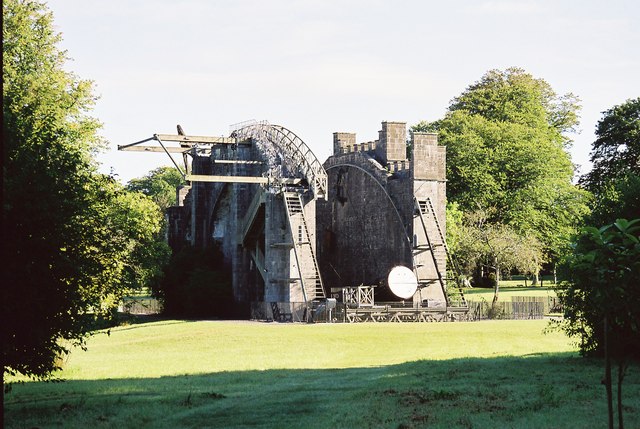 In the early 1840s, William Parsons, third Earl of Rosse in Parsonstown, Ireland, decided he was going to create the largest Telescope in existence. William Herschel, pioneer in astronomical studies, had constructed a Telescope in 1774, with which he discovered over 5 000 Nebulae. He also discovered that Uranus was not a distant star, but a planet in our solar system. As well, he identified the moons of Uranus and Saturn. Unfortunately, Herschel leave no notes on how to construct large mirrors necessary for telescopes to collect light; his would have been the largest mirror ever make. So Parsons had to start from the beginning. It took several years of hard work, and mirrors that failed or break, but the result was a 72-inch diameter, 3-inch thick mirror made of 1. 5 tons of tin and copper alloy. Burning hot, liquefy metal was moved to mold with cranes and then cooled for 16 weeks. New technology of steam-powered tools enabled Parsons to complete work much faster than Herschel had. It was Parsons intention to make two working mirrors in order to have one to use while the other was being cleaned and polish, since copper in speculum mirrors tarnish quickly. The tube and supportive base were completed in 1845. The device was so large locals began to refer to it as Leviathan. Tubing was reinforced near the mirror with hinge and two devices that allow tube to incline, giving scope substantial range of altitude. Fifty foot tall and seventy foot long supporting walls hold tubes on both sides. A set of chains, pulleys, and counterweights keep the Telescope in balance and controlled altitude. The tube was of Newtonian design, with eyepieces located on the side. The Device looks almost like a cannon pointing to the sky. With it, Parsons was able to examine Nebulae note in findings of Herschel and his colleague Charles Messier and verify star Clusters and Nebulae they had discover. Parsons realized several Nebulae had spiral type arrangement, such as Messier 51, Whirlpool Galaxy; many were not Nebulae at all, but single galaxies. He study and name Crab Nebula and also study Orion Nebula. After William Parsons died in 1867, Laurence Parsons, Fourth Earl, continued to operate the Telescope. J. L. E. Dreyer used it from 1874 to 1878 and began compilation of the New General Catalogue of Nebulae and Clusters of Stars. The Leviathan Telescope remained in use until about 1890. It was partly dismantled after Laurence Parsons died in 1908, and in 1914 the Science Museum in London claimed one of the mirrors and its box so it could be put on display. The original walls, tube, second mirror box, and universal joint were used in the reconstruction of Telescope by the seventh and current Earl, William Clere Leonard Brendan Parsons.

Remarkable contributions made by Irish scientists to the advancement of knowledge are celebrated at the new Science exhibition Centre which has been officially opened to the public at Birr Castle Demesne, Co Offaly. Minister of State for Science, Technology and Commerce, Mr Noel Treacy, yesterday opened Ireland's Historic Science Centre, based in the grounds of Birr Castle. Centre, together with complete restoration of Castle's great telescope, Leviathan of Parsonstown, has involved investment of £3. 35 million. Ireland's Historic Science Centre is a series of nine galleries highlighting the work and international contributions of many of Ireland's leading scientists. In particular, it presents achievements in astronomy, engineering and photography of two generations of the Parsons family, Earls of Rosse, whose family seat is Birr Castle. Exhibition Centre was a house in an old stable block and coachhouse, say Seventh Earl of Lord Rosse, Brendan Parsons, who described it as completion of our second great dream after the telescope's full reconstruction. Lord Rosse says the Centre represents a secret which we have kept from the world. That Ireland has a real scientific core. The Exhibition explains the work of the Third Earl, who turned his estate into a foundry and workshop to cast metal mirrors and build a great telescope in the early 1800s. When complete, Leviathan was the largest telescope in the world for many decades and brought to Birr some of the world's leading astronomers of time. His son, Fourth Earl, was note engineer and Design new and more efficient steam turbine which transformed sea transport and, ultimately, electricity generation. The exhibition also describes many Irish scientists who either used great telescope or who conducted important research through the 1800s and early 1900s. It provides a who's who of Ireland's greatest scientists of time, component of our heritage which is often ignore. The galleries include many artefacts from these times, including experimental equipment, personal papers and old pictures. Displays were put together by Ms Ann Scroope, of Scroope Design of Dublin, who spent 18 months preparing 620 square metres of exhibition space. Development also includes restoration of the original foundry and turf house. As we move into new millennium, it is vital that we carry forward our heritage and our great scientific excellence to future generations, says Mr Treacy. The historical importance of scientific work which takes place at Birr would be further highlighted with the issue in January of the millennium stamp to honour telescope. He thanked Lord Rosse and his wife, Countess Alison, for their hard work in developing the Centre. He also praised both financial and administrative support given by Dr AJF o'reilly, who serves as chairman of the Centre's Development council, and Dr Edward Walsh, chairman of Birr Scientific and Heritage Foundation. Dr Walsh said the Centre brings to life this unique piece of Scientific Heritage, adding that the project would continue into a new phase.

William Parsons, Third Earl of Rosse, had an idea to build at Birr telescope far surpassing any of its predecessors-instrument with 6ft-diameter speculum that would acquire notoriety as Leviathan of Parstonstown. Construction of Leviathan, which took almost two years and entailed many setbacks, was an astonishing feat. Casting speculum requires a huge foundry-create in the dry moat surrounding Castle-in which peat-fired furnaces were used to heat three iron crucibles, each 24in in diameter and containing 1. 5 tons of tin and copper alloy. Molten metal was transferred by means of cranes into an enormous mould, where it was carefully cooled over a period of 16 weeks. The next stage was the laborious and time-consuming process of grinding and polishing. Speculum was successfully cast, but the surface was covered with minute fissures, about breadth of horse-hair, explain William Rosse later. These we resolve to grind out. Grinding continued for nearly two months, machinery working for part of time at night. Speculum was then polish, and its performance equaled expectations. Since the process of polishing was slow and metal tarnished quickly, two mirrors were build-making it possible for one to be re-polish while the other was being used for observation. A Telescope 56ft-long wooden tube and hoist were fixed between two castellated brick walls 50ft high and 70ft long. The movement of the tube was controlled by chains, pulleys and counterweights. A platform for observing objects at low altitude was built at the southern end of the walls. For high altitudes, long gallery Mount on the west wall moves across central space to follow tubes lateral motion. At least three assistants were needed to help observers by moving winch and shifting galley. It has long been recognized by astronomers that larger telescopes mirror more light could be grasp, or collect, allowing fainter and more distant objects to be study-and what made Leviathan so powerful was its tremendous light-grasp. At the time of its creation in 1840s, it was by far the biggest telescope ever build, and it would remain the largest telescope in the world for almost three-quarters of a century, until it was overtaken in 1917 by the 100-inch Hooker telescope on Mount Wilson in California. One issue that obsessed early 19-century astronomers was the true nature of nebulae-objects resembling luminous clouds of gas among stars, many of which are now known to be galaxies outside the Milky Way. William Rosse used his Leviathan to determine that some of these nebulae had spiral structure, and he and his assistants recorded their observations in meticulous notes and drawings-at time when photography was not a practical option. News of Russian discoveries spread like wildfire, and visitors flock to Birr, eager to see and use wondrous instruments for themselves, while guidebooks and newspaper articles help to establish earls astronomical and technological reputation. Some reports distinguish between world BR and AR-Before Rosse and After Rosse.