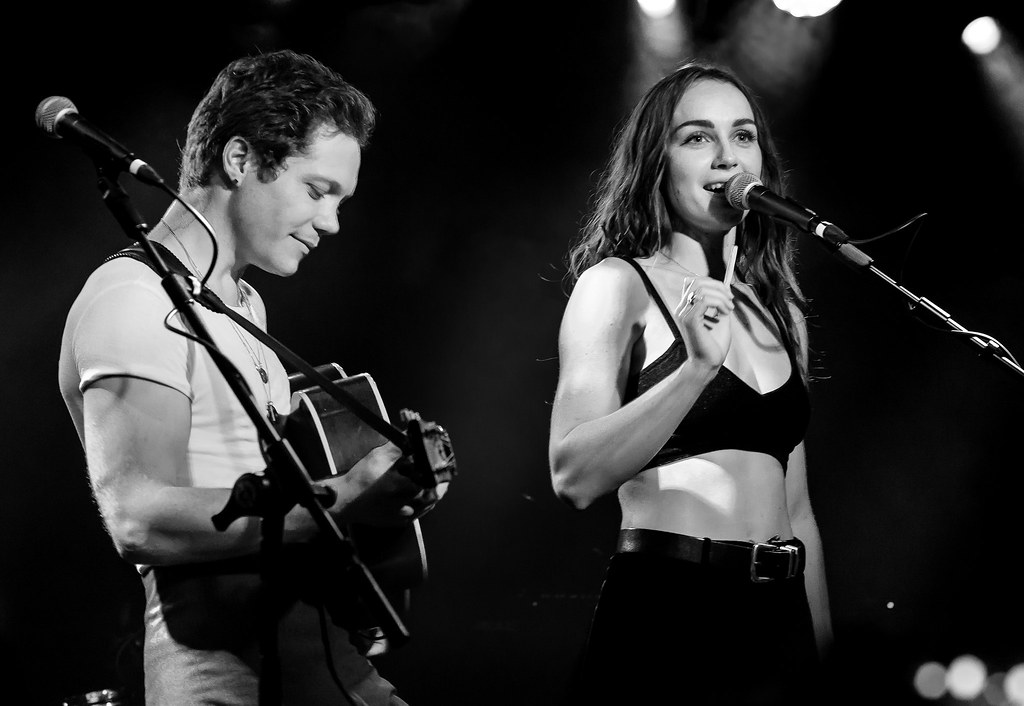 Los Angeles-base singer / songwriter Zella Day blends modern pop with a touch of Western Bohemian flair. A native of Arizona, she was raised in a small mountain town near Phoenix, where her parents ran cafe and art space whose creative clientele helped to nurture her musical interests. Picking up guitar at age 9, she was writing her first songs within a few years, influenced by classic singer / songwriter records in her parents' collection and her rugged natural surroundings. Eventually relocating to LA, Day first came to notice when her 2012 acoustic cover of White Stripes' Seven Nation Army began racking up hits on YouTube. While it's tempting to compare Day to ubiquitous pop divas such as Lorde and Lana Del Rey, sonqwriter has her own charmed style. Unlike some of her peers, her songs are more about being in sync with the universe rather than Vice versa. Soon she adopted a lusher, pop-orient sound, which led some critics to refer to her as happier sounding Lana Del Rey. Her first single, Sweet Ophelia / 1965, arrived in April 2014 and in October of that same year she released her self-title-debut EP on California indie B3SCI Records.

Rising songstress Zella Day's momentous performance at the first weekend of Coachella 2016 had Consequence of Sound declaring, It's entirely possible that Zella Day look back on Coachella 2016 as a moment that launched her career in earnest. Day is an undeniably powerful vocalist. Zella has also recently graced the stage of several Late Night shows, including Late Night with Seth Meyers, Last Call with Carson Daly live from the recent LA show at Fonda Theatre, and her television debut on CONAN last year. The Arizona native released her debut album KICKER last year via Pinetop Records / Hollywood Records. Bold statement for budding singer-songwriter exploring depths of toxic relationships and modes for resilience, New York Times lauds KICKERs depth, finding hints of genuine darkness behind each treacherous romance. 2015 saw Zella embark on an expansive US and European Tour that included highlight plays at Billboard Hot 100 Fest, iHeartRadio Music Fest and Lollapalooza, of which the Chicago Tribune proclaim, hook galore, and chorus that swing for fences. Since her self-title debut EP fall 2014 via tastemaker label B3SCI Records, Zella Day has seen support from the likes of FADER, Guardian, SPIN, Pigeons and Planes, Noisey, interview Magazine, and Paste Magazine. Zella continues to trailblaze distinct edge in the fashion world via partnerships with clothing brands Coach, Maje, and Free People, appearances at several NYFW 2016 shows, as well as editorial features with Vogue, ELLE, Vanity Fair, W Magazine, Harper's Bazaar, Refinery29, FLAUNT, PAPER Mag, V Magazine, NYLON, LADYGUNN, LATERALS, WhoWhatWear, and Playboy 'Artist To Watch'. Zella Day first made a splash in 2012 with the cover of White Stripes Seven Nation Army, which is Top Hype Machine. Raise in Pinetop, Arizona, small mountain town of 7 000, Zella embraced creativity early on, inspired by a vast backdrop of natural beauty. Surrounding herself with other musicians, Zellas family-own Mor Mor Coffee House become sanctuary for budding artists. Pulling dually from songwriting legends and her old-West, Clint Eastwood-clad surroundings, Zella began writing songs with a distinct raw grit that continues to define her sound today. Now based in Los Angeles, Zella continues her strong upward momentum with her debut album out now and a riveting live show that will captivate many more audiences in 2016.

Zella and her sister Mia were born and raised in Pinetop, Arizona. Day Release her first single Seven Nation Army on June 14 2012, under WAX LTD. She was featured in Sultan & Ned Shepard's single All these Roads along with Sam Martin. The music video was Release few weeks later on October 22 2013. On March 21 2014, Day Release audio for song of hers called 1965. The song was later sold digitally, making up her debut single, 1965 / Sweet Ophelia. The single was Release in April, 2014. That same month, Day made her debut extend playing Zella Day on vinyl. The Video for Sweet Ophelia was Release few months later on October 24 2014. That same day, she Release EP, Zella Day, on digital outlets. The EP features its lead single Sweet Ophelia, along with songs Hypnotic, East of Eden, and Compass, although 1965 was left out for unknown reasons. The EP received critical acclaim, Addy Stupin from Harborlight gave the EP high praise, as incredibly satisfying and impressive. The extended play also peaked at 16 on Billboard Heatseekers chart. One of the songs from the EP, Hypnotic, serve as one of iTunes' singles of the Week where it was available for free download. Hypnotic was later Release as EP's second single. The music video was released on VEVO on February 27 2015, and has since accumulated over 3 million views. In early 2015, Day announced that her debut album was titled Kicker and was Release on June 2 2015, under Hollywood Records. It was received favorably and got featured on iTunes new Release page. Day's song Sacrifice appears on Divergent Series: Insurgent-Original Motion Picture Soundtrack. Making her national television debut on June 10 2015, Zella Day and her band appear on the Conan show and perform her song High. The upcoming movie, Finest Hours, uses Day's song compass as a background track in its trailer. Zella has had multiple TV appearances, including Conan o'brien, where she performs high, and Late Night with Seth Meyers, where she performs hypnotic. Zella Day is included in the line-up for Coachella 2016.