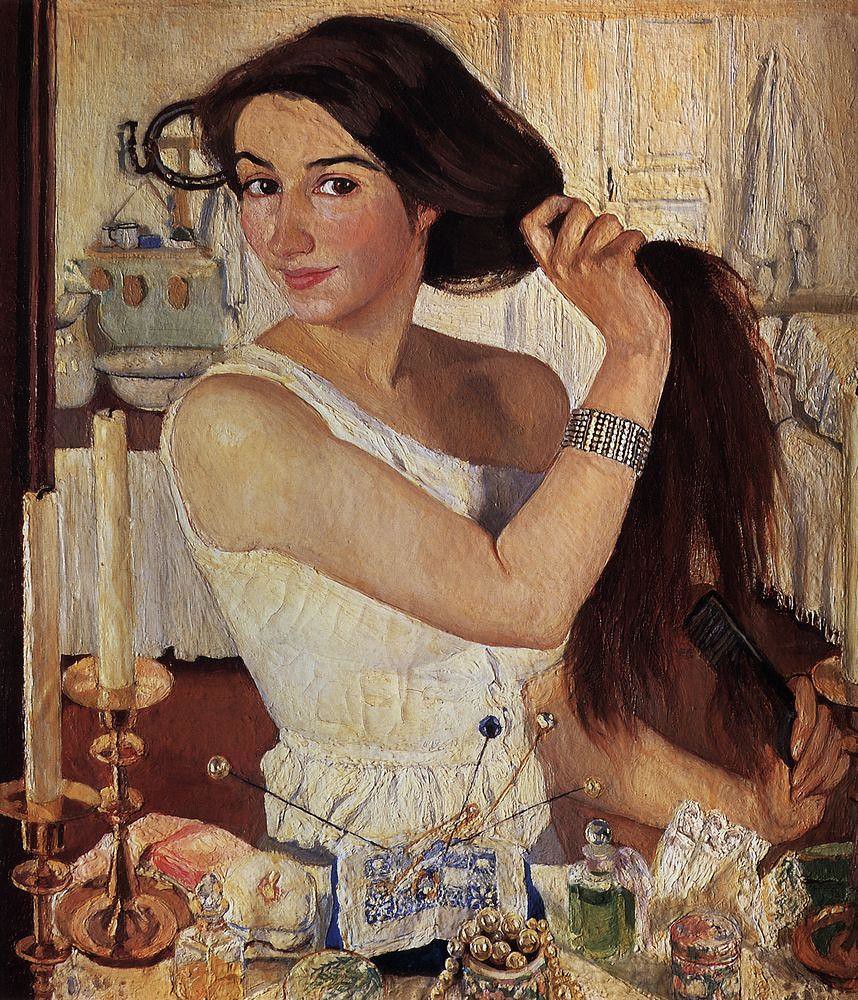 Zinaida Serebriakova was born on the estate of Neskuchnoye near Kharkov, Ukraine. She belongs to the Benois family, one of the most refined and artistic families of the ancient Russian Empire. She graduated from Gymnasium in 1900, same year she entered an Art School founded by Princess Maria Tenisheva, where Ilya Repin and Osip Braz were her teachers. Serebriakova travels to Italy and Paris to complete her studies, In Paris she studies at Academie de la Grande Chaumiere. And in the year of 1905, she married her first cousin, Boris Serebriakov and took his surname. Since the beginning of her career, she wanted to express her love for nature and for her country, showing to the world the beauty of Russian land and people. Most of these works are sketches from nature, Even though she was very young at time, talent, confidence and boldness of her style were visible. Public recognition came with her Self-Portrait At Dressing Table, This painting was exhibited for the first time in a large exhibition organized by the Union of Russian Artists in 1910. Following the success of this painting come other portraits as Portrait of Artists mother N. Lanceray. These portraits are considered completely mature works. Between the years 1914 and 1917, she painted series on the theme of Russian rural life, work of peasants and the countryside which were so dear to her. Good examples of this period are her paintings of Peasants, In these works Serebriakova reveals her talent as a monumental artist. During the Revolution, her life changed completely, Her husband died and she was left without any income, responsible for her four children and sick mother. Family suffers from hunger and she needs to give up oil painting in favour of less expensive techniques such as charcoal and pencil. She did not switch to the futurist style that was so popular among her contemporaries, nor paint portraits of commissars. She works making drawings of exhibitions at Kharkov Archaeological Museum. And after the October Revolution, her work focused on theatre life. 1924 She goes to Paris where she received commission to large decorative mural, After finishing work she tried to return to the Soviet Union, but she was not allowed to return and she only brought to Paris her younger children. She had to wait many years to see her older children again. Zinaida Serebriakova died on this day in 1967, at the age of 82. Shes bury in Paris At Russian cemetery At Sainte-Genevieve-des-Bois.

Happiness on canvasIt is a phrase describing works in earlier times by Zinaida Serebriakova. She was famous for her vivid style. It is normal to coincide most her biggest exhibition throughout past thirty years, which was celebrated in fifty memorial for death of artist and centennial memorial for October Revolution with spring in Moscow. Despite frenzy French impressionism and cubism and At later time, socialist realism, Serebriakova remains correct for Russian traditions before the Revolution. Her works are considered as more representative and influence by Empire Russian rural as lot of artists acknowledge. Another influence on Artists work was her life at Neskuchnoye: She was delighted by the pure colours of local countryside, by the leisureliness of country life and by the freedom and plasticity of movements of peasants at work. Devotion of Zinaida Serebriakova in analysis truth leads to unexpected movements shedding light on flexibility of the human body and encapsulating of autobiography in her portraits. Her works are not intended as photographs, but Zinaida Serebriakova's manifestation of beauty. Zinaida Yevgenyevna Lanceray Serebriakova She was born to a family of artists in the House of Neskuchnoe in Ukraine. Her father, Yevgeni Aleksandrovich Lanceray, was a famous sculptor, while her grandpa Nikolai Leontyevich Benois, was an Academician and group chief of Saint Petersburg for architectures and he was also a member of the Russian Academy for Science. Her uncle, Alexandre Nikolayevich Benois, was a bright artist and founder of Mir Iskusstva Art group. One of Zinaidas brothers, Nikolay Yevgenyevich Lanceray, was a talented architect, and her other brother, Yevgeny Yevgenyevich Lanceray, took his position in Russian Art as master of monumental painting & graphic Art. And she studied under Ilya Repin in 1901, She got married to her first cousin, a railway engineer, subsequent her marriage from 1905-1906, She studied at the Academie de la Grande Chaumiere in Paris. After she returned to Russia, Zinaida Serebriakova's early works, which appeared At exhibition in 1909, already show her own style and field of interests. While studying classical art in the State HermitageMuseum, Saint Petersburg and in museums of France and Italy, she was drawn to works of Tintoretto, Poussin, Jordaens and Rubens by their powerful plastic forms and national character. She obtained wide Republican acknowledgement for Her Self-Portrait At Dressing-Table, first shown at a large exhibition mount by Union of Russian Artists in 1910.